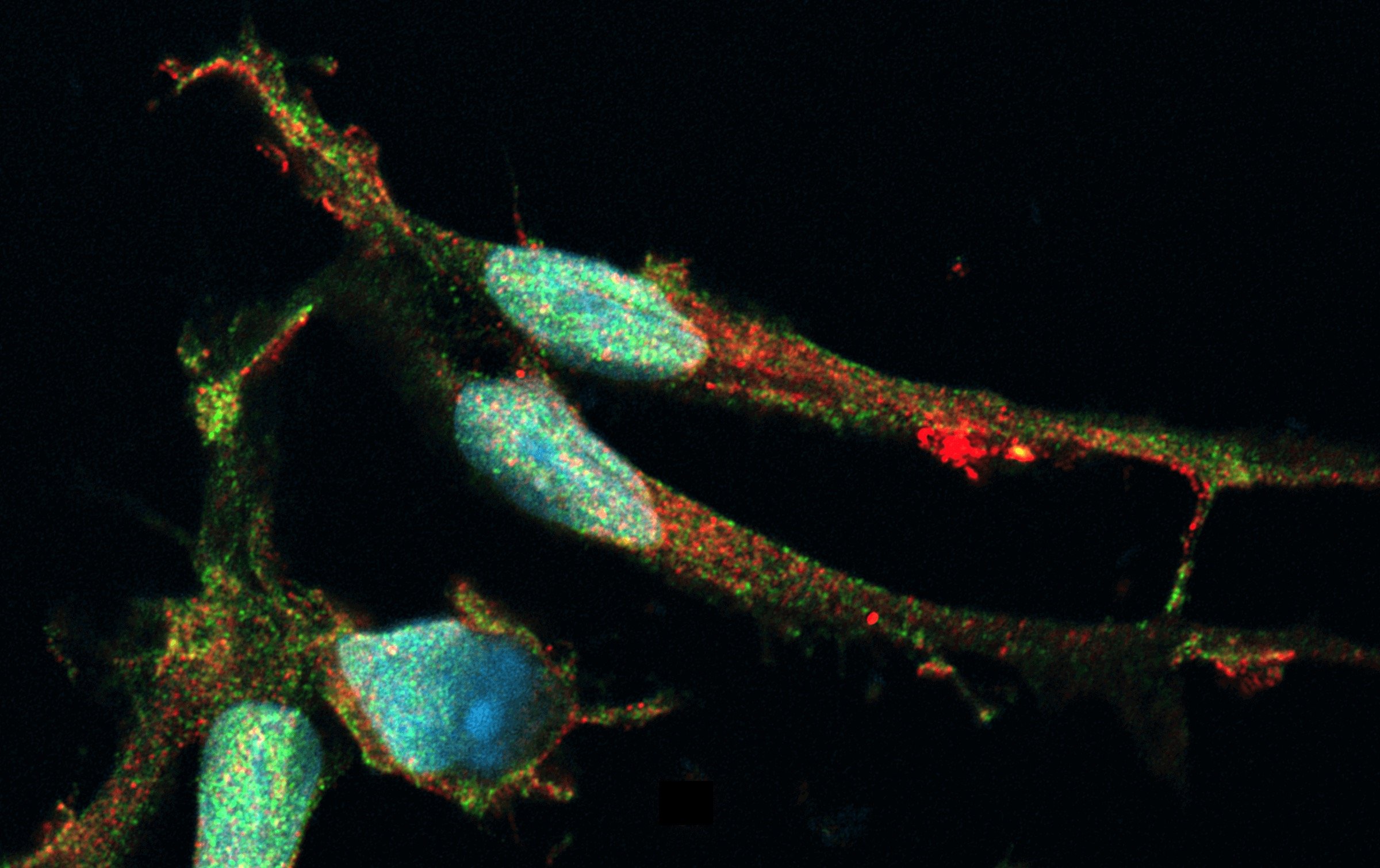 Beyond neurons - microglia cells and their role in neurodegeneration and neurodevelopment

Estimates of the human brain’s composition suggest that for every neuron there is one non-neuronal support cell. Among their many roles, these supportive cells—also known as glial cells—help maintain and facilitate neuronal activity by guiding synapse formation, modulating and pruning existing synaptic connections, and protecting neurons from would-be pathogens. Put simply, glial cells are as critical to brain function as neurons are. And, because of this, when they stop behaving normally, they are also critical factors in the development and progression of neurodegenerative diseases.

There are multiple different types of glial cell, each with its own potential role in health and disease. But in recent years, researchers studying brain disorders have paid close attention to one glial cell type more than others: microglia.

In the following sections, discover a brief overview of microglia, learn about microglia’s function in the brain, and hear from leading microglia expert Dr Anthony Vernon about how microglia may contribute to neurodegenerative and neuropsychiatric diseases.

Microglia are best described as brain-resident macrophages, often referred to as the “immune sentinels of the brain.” These small, non-neuronal cells are found in the brain and spinal cord tissues. Like other glial cell types, microglia were previously thought of as simply being the ‘glue’ that holds the brain together (in Greek, ‘glia’ means ‘glue’). We now know, however, that microglia play a vital role in many neuronal functions (detailed below).

What do microglia do?

Microglia function as immune cells in brain tissue where they generally help to maintain brain homeostasis as well as respond to tissue damage or injury along with other glial cell types. The specific function of microglia, however, varies depending on an organisms' developmental stage, tissue location, and many other factors. Some notable functions of microglia include:

Stated in a more poetic way, researcher Dr Anthony Vernon, Ph.D., describes microglia as “the builders, gardeners, maintainers and guardians of the brain.” Dr Vernon and his colleagues at the Institute of Psychiatry, Psychology & Neuroscience at King's College London and the MRC Centre for Neurodevelopmental Disorders are studying the function of microglia, not only in maintaining health, but also in the context of brain disorders related to neurodevelopment as well as ageing.

The role of microglia in neurodegenerative disease

Microglia clearly play an important—albeit complex—role in maintaining neuronal health. It’s perhaps not surprising then that loss or gain of functions by microglia may have a cascading effect that ultimately contributes to, or drives, disease development.

It is worth noting that microglia have many different functional states that are characterised by altered gene expression and altered cell function. The control of this state switching is mediated, in part, by an array of cell surface receptors that allow microglia to detect environmental cues and adjust their functional state accordingly, but we still have much to learn about how this process is regulated under different contexts.

One example of the importance of microglia states in the context of brain disorders is the ‘Disease Associated Microglia’ or DAM state. Evidence suggests that microglia transition to the DAM state in response to various cues, such as neuropathology associated with neurodegenerative disorders, including the accumulation of amyloid beta fibrils in Alzheimer’s disease. It’s thought that this transition to the DAM state enables microglia to perform a homeostatic function and limit neuronal damage. Evidence from human genetics points to the potential importance of this state, for example, mutations in the Triggering Receptor Expressed on Myeloid cells 2 (TREM2) gene are associated with a significantly increased risk of developing Alzheimer's disease. Mechanistic studies in animal models and using iPSC technology provide evidence to suggest that TREM2 mutations may represent a loss of function, such that the mutant microglia may be unable to adopt the DAM state and carry out homeostatic functions. That said, more work is needed to understand the role of TREM2 in the context of other microglia states and its potential role in other myeloid cell populations observed in rodent and human brain tissue in disease, such as monocyte-derived “disease inflammatory macrophages”.

Similarly, gain or loss of microglia functions  during brain development may have lasting impacts, particularly given the role of microglia in synapse formation and elimination. Dr Vernon explains, “If the microglia aren’t doing their job in that early stage of life to help those circuits develop properly, then that’s potentially going to have a knock-on effect later in life, in terms of cognitive and/or emotional behaviour. Such changes in the developing brain may for example, leave an individual more at risk to develop psychopathology later in life. So, really, the crux there is to understand how microglia are regulating synaptic formation and elimination during development.”

We are still in the early stages of understanding how microglia contribute to various diseases and much more research will be needed. To carry out that research, though, researchers will need reliable ways to model the dynamic behaviour of microglia in healthy and diseased states.

Studying microglia cells in vitro is far from trivial. Microglia are highly sensitive to their surroundings and may rapidly switch functional states depending on the presence and health of cells around them, the growth factors they’re exposed to, and many other environmental cues. Coaxing microglia to behave as they would in vivo is thus a challenge in and of itself. But, researchers also face challenges with sourcing microglia cells - patient-derived cells are not easy to come by.

To enable the study of microglia in vitro, researchers often rely on a combination of non-human derived cells (such as microglia taken from rodents). While useful, these cells likely have limited translational potential owing to critical differences between species. Therefore researchers like Dr Vernon often rely on the use of human induced pluripotent stem cells (hiPSCs) from which microglia can be generated using a range of protocols. “It’s a human-led system, we’re interested in human microglia and human neurodevelopment. There may well be key species differences in how microglia behave,” says Dr Vernon.

Directed differentiation—an arduous task in which stem cells are manipulated into specific cell types—can be used to generate human microglia cell lines in vitro. These models enable researchers to closely study the genetic and signalling networks that are engaged in microglia when exposed to disease-relevant conditions. Such studies may shed light on the mechanics of microglia functional switching, its relationship to disease, and how microglia may be leveraged as therapeutic targets.

To enable such studies, recent technological advances in hiPSC technology are greatly improving scientists’ ability to generate both naive and activated microglia in vitro. bit.bio’s opti-ox™ technology can be leveraged to produce hiPSC-derived microglia on a large scale and enable much larger, more robust studies to be carried out. You can learn more about opti-ox technology and how it’s being used to produce microglia in this webinar.

With this technology, researchers like Dr Vernon are looking to build more complex, human-relevant models, including 2D and 3D co-culture systems. “Obviously, I think microglia are the most important cells in the brain,” Dr Vernon laughs, “but the reality is, they’re one cell type. The real beauty here of using hiPSC models is that we can study many cell types from the same starting population and see how they interact. You can even graft them into ‘host’ brains using animal models, to see how they function in vivo. Combined, I think these approaches will transform our understanding of human microglia in health and disease.”